LAST STAND OF THE H.M.S. GAIRSAY 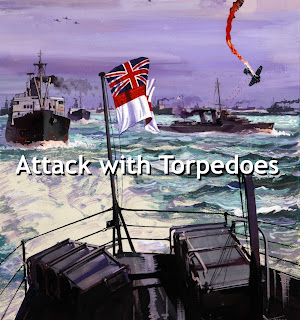 I’m the proud owner of some 1:600 Skytrex "Fight for the Narrow Seas" miniatures. This manufacturer have a good collection of the small and not so small WWII ships belonging to the British, German, American, Italian and Japanese "mosquitoes fleets".
The quality of the miniatures is outstanding and I strong recommend you to take a look at their website, http://www.skytrex.com/338/1600th-coastal-forces-fight-for-the-narrow-seas/

The Skytrex scale, 1:600, it’s a little big for the size of my game table but I recently discovered a new range for the same subject but with a more affordable scale: 1:1250. This brand is Figurehead Coastal Forces, available via http://www.magistermilitum.com/ and it still maintaining a good quality of casting despite the smaller size of the ships.

The variety of models is a bit more scarce that the Skytrex catalogue but at least have the most representative ships of the war, the MTB, MGB and the E-boats and even ships with more tonnage but still very presents in the naval coastal warfare. This is the case of the ships of this battle report; the British “Isles class” armed Trawler and the German “Elbing class” torpedo boat (a boat of 1.755 Tons!) 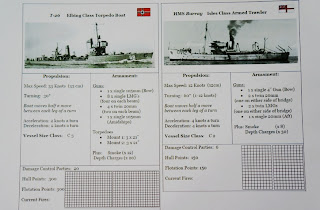 Of course it’s an asymmetrical confrontation given the disparity in size, because the Isles is half the gross tonnage of the German Elbing but I was curious to see how long the trawler could hold the confrontation and how much punishment could inflict to the German torpedo boat. 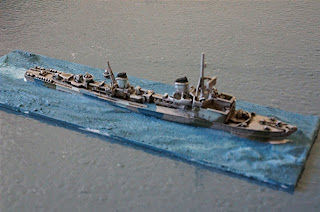 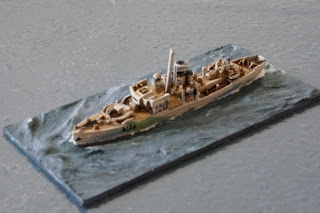 About the rules, I’m a fan of David Manley’s “Schnell Rules for Schnell Boote”, simple but with a clever damage system, and very easy to learn, Mr. Manley have another and much more detailed rules for the same subject, “Action Stations” but my choice for this battle report goes to “Attack with torpedoes”. 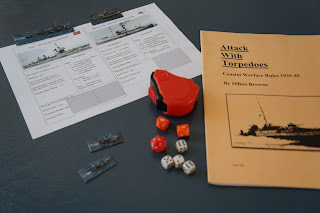 “Attack with torpedoes” wrote by Dillon Browne occupy a middle place among the complexity of the previous ones. It has enough detail about the critical hits and the use of the damage control parties, in my opinion a vital part as a micro-manage management in naval wargames.

As a curiosity comment you that this is the rule commonly used by the Naval Historian Angus Konstam and the members of his club, Edinburgh Wargames.

So the two ships start the scenario sighting each other. 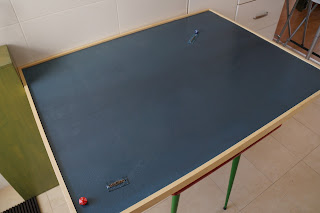 Both ships increase speed, the trawler to her maximum, 12 knots and the Elbing to 19 knots.
At long range only the 105mm and 4” guns are likely to reach their targets. The first salvo from the Elbing is a near miss. 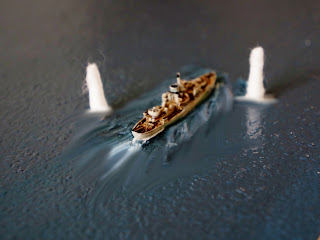 But the 4” gun of the trawler zeroed at the first hit, if only causing superficial damage. 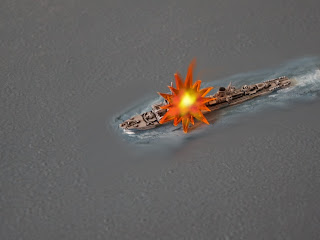 The commander of the Elbing try another tactic and launch a torpedo while increase the speed to 21 knots. 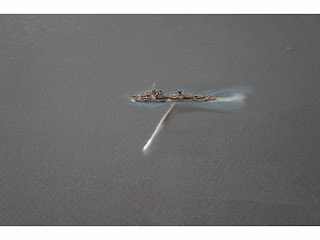 But the torpedo was launched at a great distance and misses the target by a wide margin. 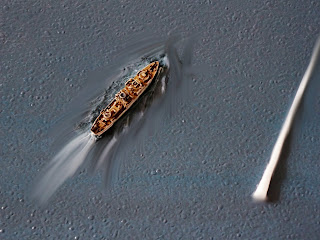 Soon the German salvoes reach their target causing heavy damage, starting fires and reducing the speed to a merely 8 knots.

The damage control parties manage to put out some of the fires and fixed the damage caused to the fuel pipelines, restoring the speed and steering to the darkness horizon in order to escape but this cause that only the aft 20mm can fire back. 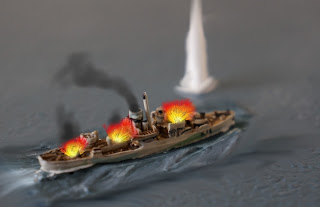 But the Elbing has closed distances and shoot at the British trawler with the bow and stern guns plus all the automatic weapons. A rain of high explosive falls on the unfortunate vessel, causing her more fires and a waterline leak. But the most serious blow was a direct impact on the engine room, which kills part of the damage control parties and cause the complete destruction of  machine room. Now she is a derelict floating inert on the water. The British were still returning the fire but causing no serious damage on her nemesis. 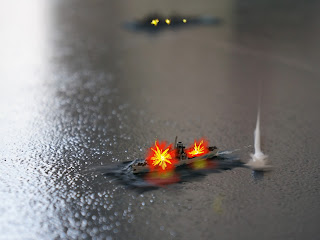 The stopped trawler is a sitting duck and a new torpedo hit the ships sealing the fate of the proud British vessel that begins it's long journey to the bottom of the Gulf of Biscay. 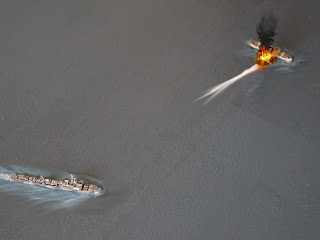