A LATEEN SAIL ON THE HORIZON

I'm a fan of games where you have ships, landing and boarding actions.
Today I present to you a new addition to my fleet. A few months ago I purchased a box of the classic Pressman’s Weapons and Warriors, Pirate Battle game, a "must" item for any pirate or colonial’s games fan. 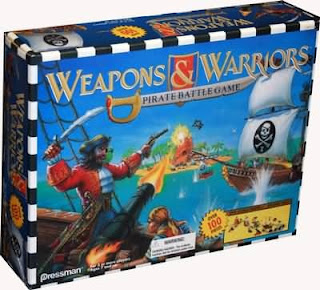 I had under my belt at least four pirate ships, two of them built using the blueprints of the legendary Gary Chalk and two made ​​from scratch, a caravel and a small cutter, both made ​​with plasticard. But as many other fans have done, I liked the idea of turning the W&W boats on a ship like the classic Red Sea Sambuk or the Mediterranean Xebec. 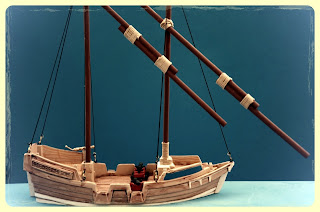 The changes consisted basically of removing the figure head and the bowsprit and suppress the stern lanterns. Obviously the most important modification was to remove the classic square rig and replace it with the lateen sail masts. 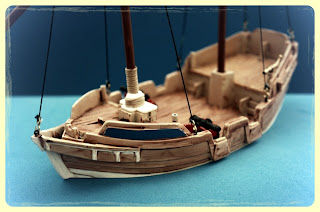 The new masts are made of balsa wood and ropes and the stays are made with black elastic sewing thread, so you can snap on and off easily. Masts thereby may be removed for transporting the boat in a simple and safe mode. 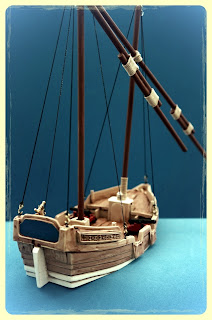 As you can see I built a simple supports for the culverins, up to two of them for each board. These, in addition of the smoothbore guns, makes it a powerful enemy. 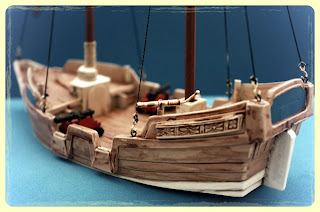 Now we just need hoist the sails, lateen, of course, and steer to the Blue Nile at its confluence with Khartoum, sail the Rufiji Delta with smuggling supplies for the SMS Königsberg or fight Decatur in the Bay of Tripoli ...
Publicado por Eladiator en 10:41 AM