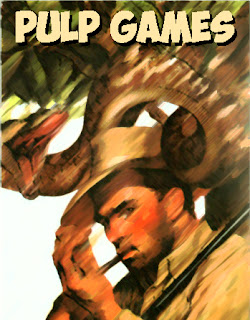 Pulp games can cover a wide range of scenarios, from a hidden war facing a sinister Chinese Tong commanded by the evil Fu-Manchu in the darkest alleys of the Victorian London to the adventures of a certain American football player transported to a strange planet populated by amazing spaceships, robots and especially lightly dressed princesses with hard character and better figure. Not to mention that there is always a nemesis to confront, the ubiquitous bad. A twisted personality villain with an unlimited need for dominates the world. This must be defeated to get “fortune and glory”.

Although these are games with few miniatures, some of them shine above the rest, the heroes. They are endowed with skills that surpass those of ordinary mortals. They are able to perform amazing feats in combat and overcome a legion of thugs still outnumbered in order to free an oppressed planet, clean a city of evil or reach a legendary treasure.
It is also true that sometimes we saw our heroes succumbing to the challenges posed. Situations like "I embrace the carnivorous plant to steal the Padishah Emerald from her leaves" to end becoming as biological fertilizer for an overfed Dionaea Muscipula. Or the attempt to save our heroine from the clutches of a gray dwarf xenomorph to finish up over a surgeon table with a practical class of Rectosigmoidoscopy.

It’s this last aspect that I'd like to highlight in pulp games. The sense of humor, so absent often in general wargames. Indeed the final result does not matter much as find time to meet several friends and have fun transferring to the gaming table the arguments many times read in Sax Rohmer and Rider Haggard novels, Flash Gordon or Buck Rogers TV serials and movies like those of a hero wearing a Fedora hat and whose name is the same as the nineteenth state of the Union.

There are many good rules set in the market, GASLIGHT, Rugged Adventures, Larger than Life and .45 Adventures among the most representative. And now a newcomer: Pull Alley. 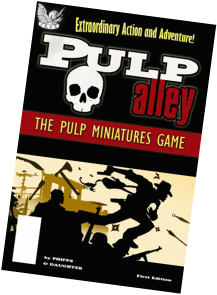 Pull Alley and his game engine has been inspired by the famous Ambush Alley. It's reflects very well the clash between characters endowed with widely disparate skills, (dissimilar combat) using the  classical rpg polyhedral dice, with the exception of d4 and d20, to provide to each character with six basic stats, Health, Brawl, Shoot, Dodge, Might, Finesse and Cunning

The freedom to create our adventurers is wide: We can choose the number of dice and its class from a pool suited for each character category; Hero, Sidekick, Ally or Follower, though respecting minimal limitations. Next, we can add abilities, most powerful and numerous for heroes and sidekicks characters than allies and followers, thus allowing a fine adjustment.

The main advantage of this rule set is the freedom provided by the system to create any "league", whatever the period or the setting. It is very flexible and allows you to choose an elite but very small cast of adventurers, such as that formed by only four figures: 1 Hero, 2 Sidekicks and 1 Ally, or a horde that could reach up to 16 thugs with very low skills under the command of a hidden "boss" who never appears in the table. 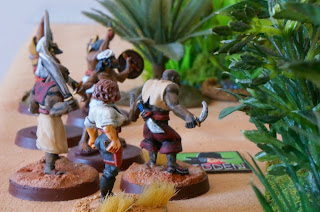 The game incorporates the concept of "Perils", an abstract mechanism of challenges through a deck of cards to test the skills of each character and that comes into play when they perform risky activities or movements in hazardous areas as well as a challenge to overcome in order to solve the "Plots". 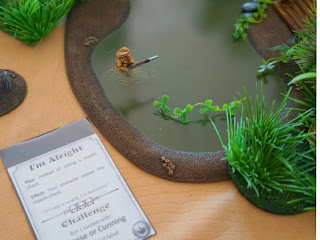 The Plots are the objectives that a league must collect in order to achieve the scenario victory conditions. But they also provide benefits for the current playing scenario and the future ones. The most immediate reward will be to win the turn initiative to your side. But will also provide bonus to the skills for the rest of the game, future resources or increase the experience to the league for the rest of the campaign, to name a few.

Something that may surprise you at first is the treatment of the fire and hand to hand weapons. In Pulp Alley there’s not a precise definition of them, only Shot and Brawl Skill. And while some people may miss him I assure you that the game engine and the intelligent use of the Perils cards compensate the lack of specific rules or characteristics for the weapons.

The combat; shooting or brawling it’s simultaneous, so both sides can suffer wounds but depending on the strategy, the players can opt for a defensive option rather than an offensive. As each of the characters suffers wounds, your skills levels will be reduced until fall to the ground unconscious.