I think that anyone who loves this hobby and especially colonial wargames have a debt of gratitude to a very special and emblematic website; Major General Tremorden Rederring's Colonial-era Wargames Page.

It was this website which led me to collecting, painting and playing with colonial miniatures soldiers and let my imagination fly with those fantastic adventures settled in exotic places.

The website is not more longer updated but thanks to the "The Wayback Machine" you can access all the useful info, inspiring battle reports and modelling advices. Here you have the link

So I thought that the best tribute to the creators of that website would be recreate one of the most emblematic battles of the Major General website: The Relief of Bungstarter Station. 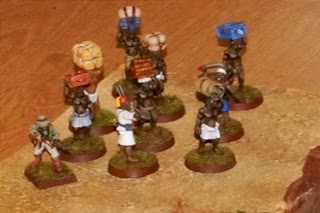 There's he hopes to be picked up and escorted down river by the Royal Navy landing party of the tugboat "Hycker". 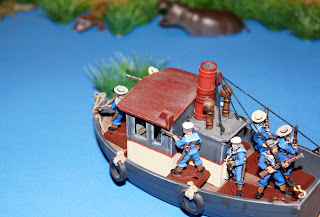 Also, the Captain Phillip Josef Kurtzman, cousin of the decesed Major Kurtzman, (see The Relief of Bungstarter Station), worried about the Ookaballakonga tribe war drums, run to assits the Thorn's porter column with an improvised unit of  "Tommy's" and Sihks soldiers. 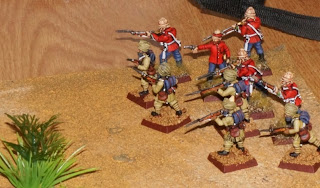 But unknown to everyone is that the jetty and the nearby wachtower has been taken by Suleiman Halif, a slave trader who has rise in arms the Ookaballakonga tribe and the pygmies of the Nanitos tribe. So the idea is ambush both columns and prepare the defense of the Oauzu jetty. 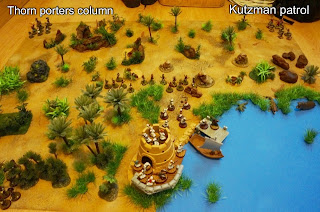 Suleiman owns a old but still in use cannon that will be ready to confront any menace coming up river. 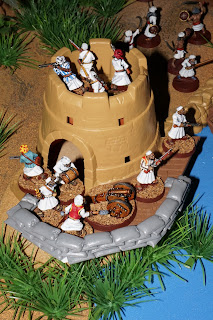 Soon the Ookaballakonga launch an attack again Thorn escort and porters, but the experimented hunter and Askari escort manage to repulse the warriors with a hail of lead. 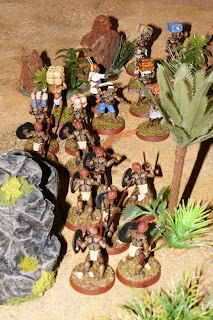 While…  Kurtzman patrol falls into the ambush launched by Suleiman men... 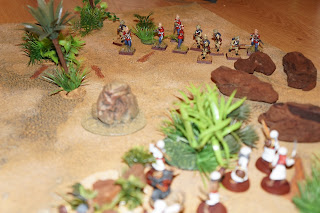 …to be finally annihilated 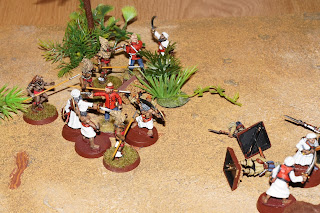 Captain Kurtzman reaches the same fate of his unfortunate cousin after a heroic defence, finally being speared to death when the attackers receive reinforcements with the arrival of more Ookaballakonga warriors.

Meanwhile the men of Lieutenant Moore get ashore on the jetty under a devilish fire from the fortified Suleiman watchtower. Midshipman Fullerton exhorts men to return fire. 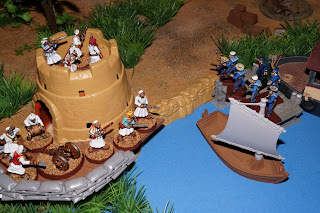 The storm of lead that falls on the jetty is relentless. The first to fall is the midshipman soon followed by the rest of the Marines. 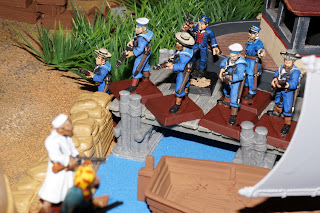 Any hope of victory disappears after the tugboat is sunk by a cannon impact. 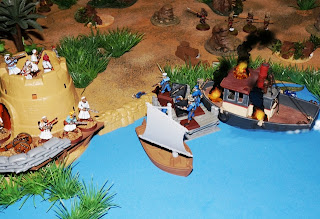 Thorn has hopes of reaching the river bank but suddenly, out of nowhere a rain of arrows falls upon the column of porters. The Pygmies have surprised them. Thorn knows he has few remaining seconds of life, the arrows were poisoned... 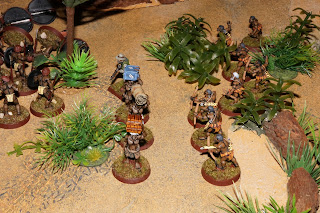 Some time later the din of gunfire stopped and the sounds of the jungle took their place.

The rules used were G.A.S.L.I.G.T.H. Like any game that uses these rules it was a very funny game, full of acts of courage and cowardly. Midshipman was immediately hit after jump over the jetty and failed the save roll despite having a Save stat of 18!
The same bad luck was the impact that sunk the tugboat after roll a Catastrophic Hit result in the vehicle chart.

In any case, soon the news of this defeat will reach the ears of the colonial powers and Suleiman acts will be punished.
Publicado por Eladiator en 3:26 PM